July 2018 - Bubbles and Bottoms for Consumers -

Most of my report is about the United States, mainly because they are still the largest economy in the world and hold the currency that is still being considered as the most valuable in the world. I mention the word “still” twice, since the “shift to the east” has been gradually taking place over the past 20 years and will eventually experience a tipping point.

Consumers in the United States haven`t had it this well for a long time. Unemployment is at the low of the year 2000 and might even go to lows that have last been seen in 1969! Not only in the United States, but all the OECD members (Organization for Economic Cooperation and Development) are seeing an unemployment rate that is at a decades-low level. 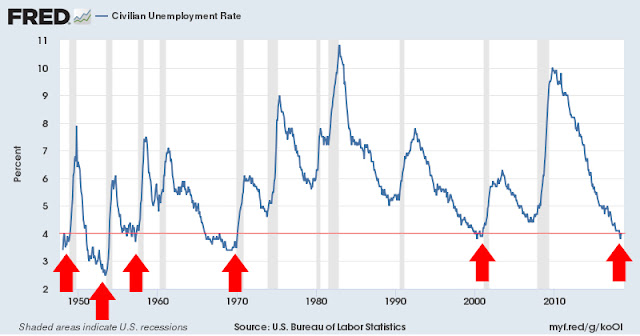 What`s the bad news? you might wonder. Well, the unemployment chart also shows you that almost every time the unemployment rate hits a notable low, recession looms around the corner (shaded vertical bars). An unemployment rate under 4% has guaranteed a recession 100% of the time since at least 1950.
“But at least consumer debt will go down and savings rates will go up when unemployment rates are so low, right?”
Yes, this would normally create a buffer for the next downturn and will support the people who have created a financial buffer for themselves. However, the next charts will show you that this time around, debt has only increased, and savings rates have only declined.

“There will be fat years and there will be lean years. But it is going to rain"
- Don Draper -

Consumer sentiment has been on a tear lately and is reaching levels last seen in 2005 and 1999. This sentiment is inversely correlated to the unemployment rate, but also directly related to the spending habits and saving rates of consumers. 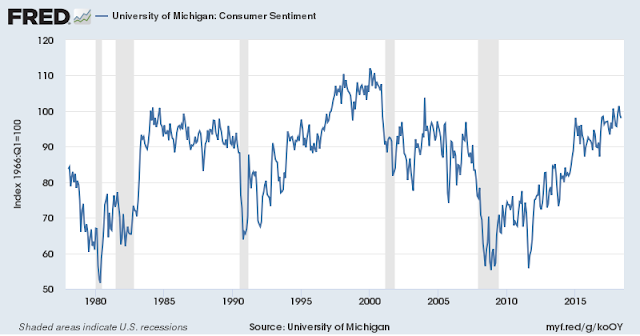 Personal savings rates have reached the lows of the previous crisis and are near the lows of the past 60 years. While initially after the housing crisis passed, people increased their savings, it ground to a halt around 2012 and has decreased from more than 10% of income, to around 3% of income. 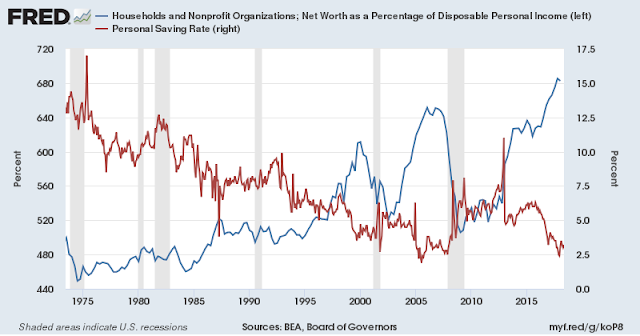 “Isn`t there any good news for consumers then?”
Net Worth as a percentage of Disposable Personal Income has reached all-time highs! Although, as you can see from the past two occasions, when Net Worth and the Personal Savings Rate start moving in opposite directions, as has happened around the year 2000 and 2006, they will eventually start reversing to the mean.
More good news? 2.5% savings rate seems to be the bottom, based on the levels in 2005 and 2009, and the recent bounce off the 2.5% level. Will we manage to turn around a decades long decline in personal saving rates? The fact that banks have been offering interest rates on savings accounts hovering around 0% for many years has most likely deterred people from saving as well. But wait, if household net worth is at an all time high, but savings rates near an all time low, then where is all that money stored?

"When written in Chinese, the word 'crisis' is composed of two characters. One represents danger and the other represents opportunity."
- John F. Kennedy -

The hunt for higher yields has pushed people to look for riskier investments, mostly in stocks and property. As you can see in the following chart, consumers have been excessively optimistic in the stock market, with “small trader call buying” at peak levels. The adage goes that small traders are considered to invest “dumb money”; they are the last ones to invest in popular stocks, and the first ones to be “under water” with their investments. 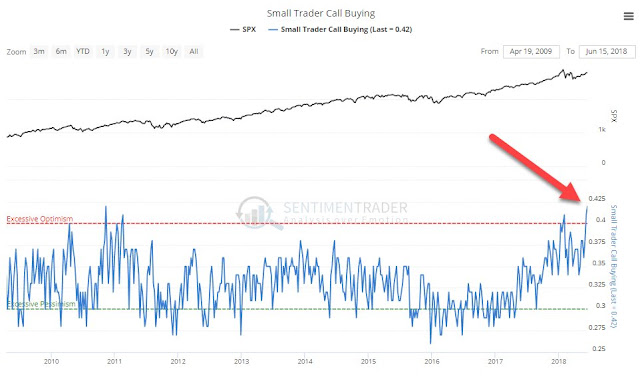 Aside from the stock market, the real estate market is another favourite for consumers who are hunting for higher yields. Before the housing bubble, the median sales price for a new house would require 5 times a median household income. Currently we are reaching 6 times the median household income for the median sales price of a new house. If you think that we were in a housing bubble 10 years ago, then you will not enjoy witnessing the current extremes in the market! 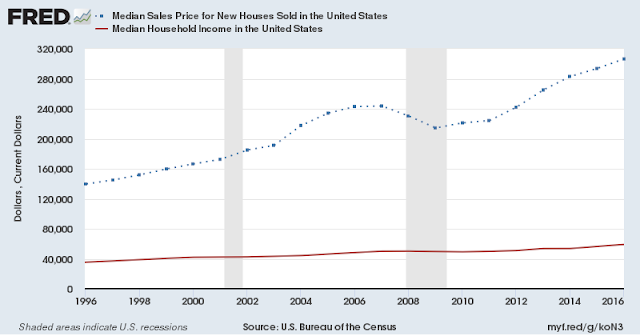 Following the increase in housing prices, mortgage debt has come back to record levels, fuelled by ever decreasing mortgage rates. As you can see, mortgage rates have bottomed between 2012 and 2016, and are now seemingly on the way back to “healthier” levels. This increase in rates will inevitably lead to even higher mortgage debt. 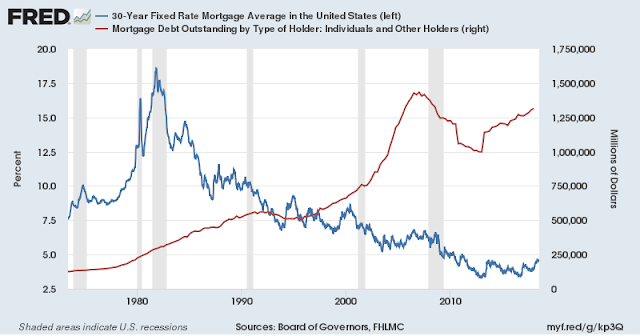 Student loans have been on the rise as well. These loans have witnessed a surge, going from USD 120 Billion at the beginning of the housing crisis, to almost USD 1.2 Trillion today! That`s a tenfold increase in 10 years! The total non-revolving credit, or student and auto loans combined, now stands at a record USD 2.858 Trillion. 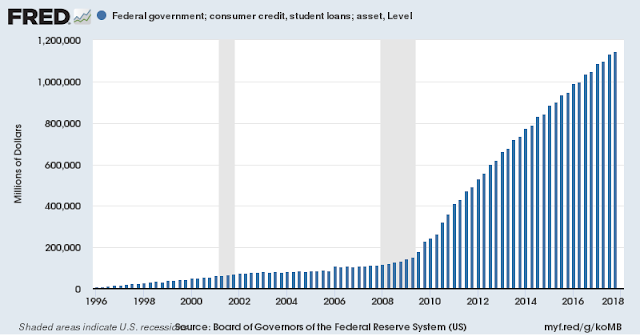 Revolving credit, which -for consumers- is mostly credit card debt, has also risen to an all-time high at USD 1.04 Trillion. 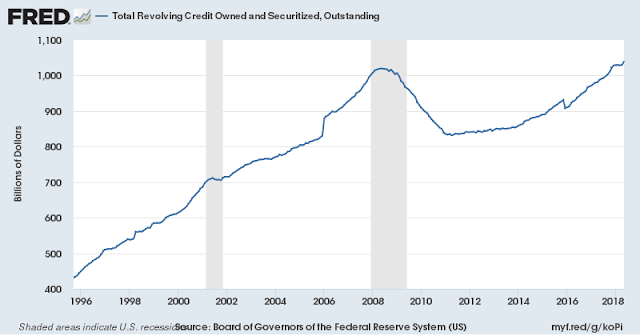 The following charts clearly shows that the interest rates are (finally) going up, after having been stuck at zero for 7 years thanks to the Federal Reserve. You would think that zero interest rates have made it cheaper for people to pay off their debt and lower their personal interest payments but, as you can see, the interest payments have only gone up over the past few years. You might then start to wonder; if people are already having a tough time paying back their debt at a 2% federal funds rate, what would it look like at a relatively normal rate of 5%? Currently the interest rates on credit card plans are at the highest since February 2010, and the second highest since 2001. 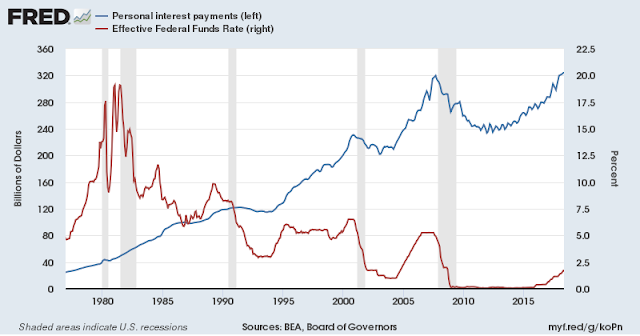 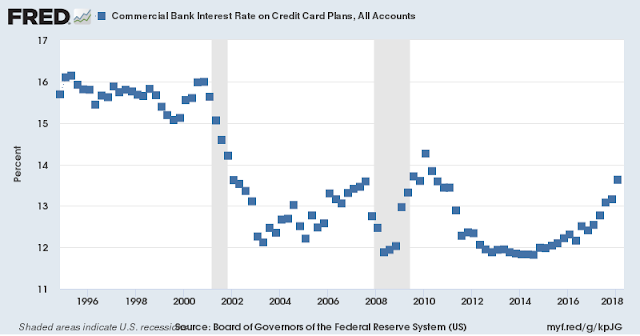 You might wonder why consumers have lowered their savings, while increasing their spending. Aside from the fact that people just start to spend more if they earn more, the reason might also be found in the following chart, where you can clearly see that medical expenses and tuition expenses have outpaced the “general” inflation levels by roughly 250% and 400% respectively over the past 40 years. 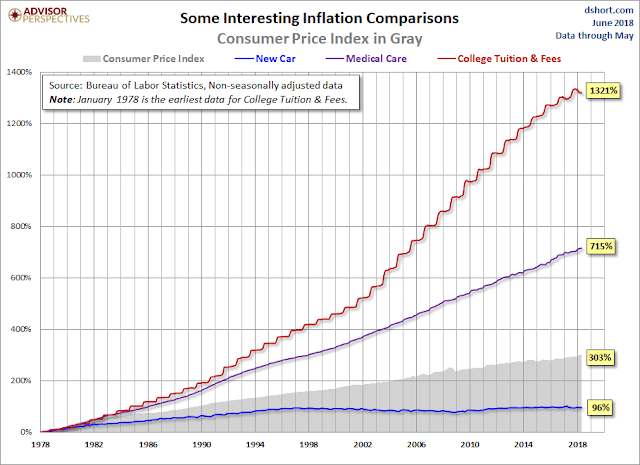 Consumers are in for a rude awakening, not having saved enough money to withstand the inevitable upcoming downturn in the economy and having invested too much in risky assets. Can the consumer be blamed? Partly; Inflation in items like college tuition and medical care has increased at a much higher rate than general inflation over the past 10 years. Aside from that, lower interest rates have made it increasingly more attractive to borrow money, and less attractive to save it. The savers have put their money to work through different channels other than a savings account, with stocks and property being their preferred options. In the next chapter I will try to show you why the stock market might not be the best investment right now.