November 2018 - Bubbles and Bottoms for Commodities -

Commodities have been a disappointment for years, but I still see them as the rising stars for the coming decade. Metals and agricultural commodities have, in my opinion, the largest potential to grow, mainly due to their cyclicality.

My all-time favourite is still Silver, and its bigger brother Gold. The following chart popped up on my radar again after making the rounds in 2016, when we were all stunned about the sudden peak in the gold inventory ratio. Back then it reached an all-time high of more than 500 claims per ounce of deliverable Gold. Just to clarify; this means that 500 different people think that the same ounce of gold belongs to them. I`ll clarify again; comex has promised the same ounce of gold, to 500 different people… I think I need to repeat this about 500 times to make myself realize how incredibly crazy this sounds!

However, after the newsflashes faded, the inventory ratio faded as well, going all the way down to a “mere” 30 claims per ounce of deliverable gold in 2017. The chart has now gained popularity again, because it is almost hitting 400 claims per ounce of deliverable gold. The big question now is: will it fade once again, like it did in 2016? Will there be a run on COMEX inventory? Or will the price of gold just rise, with a lower number of claims as a result?

In January 2016, the peak was followed by a 28.7% rally over the following months. Looking at all the geopolitical troubles, I wouldn`t be surprised at all if history repeats. 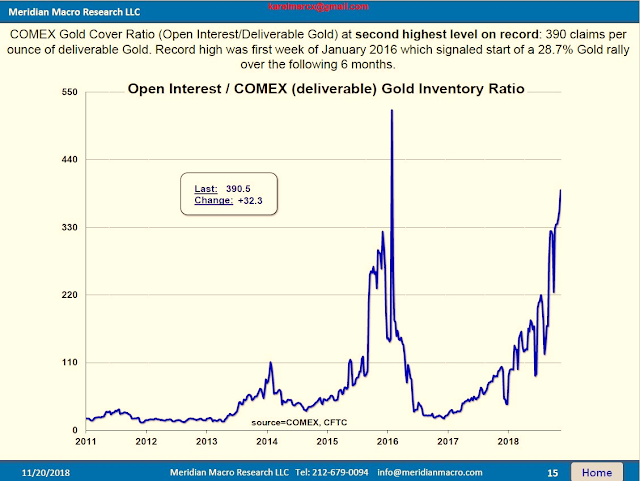