August 2018 - Bubbles and Bottoms for Governments -

Turkey has been in a currency crisis over the past weeks. The Turkish lira has dropped more than 30% in a matter of days. Many claim that statements from Turkey`s President Erdogan are to blame, but if you look closer, you can see that there`s more than meets the eye.

Emerging markets have been heavily borrowing U.S. Dollars over the past decade due to the low interest rates that were offered. Now that the U.S. is increasing interest rates, and, even more important, is engaging in Quantitative Tightening instead of Quantitative Easing, it becomes harder and harder for emerging markets to pay back their debt. During the Quantitative Easing period, the U.S. Federal Reserve (FED) was buying up bonds to revive the flow of credit to a shrinking economy. Currently, the FED is doing the exact opposite and is pulling out USD 40 Billion every month from the financial system by letting these bonds mature and not replacing them. This means that the supply of U.S. Dollars is declining, which results in higher demand (from emerging markets) and thus higher prices.

Picture a country that has borrowed U.S. Dollars at 2% interest rates, and also incurs an increase of 2% in the U.S. Dollar against their own currency. They now effectively have a 4% interest rate! When a country faces problems paying back their debtors, they can normally just print more money and the problem is gone. But if this debt is denominated in a currency that is not yours, then your best tool suddenly becomes your worst enemy; the more you print, the more the U.S. Dollar will rise against your own currency! 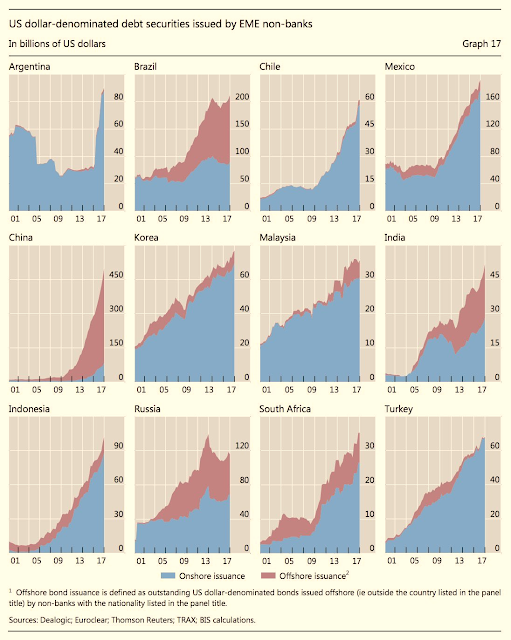 As you have probably guessed, Turkey is the largest holder of U.S. Dollar denominated debt as a percentage of GDP, coming in at almost 55%. 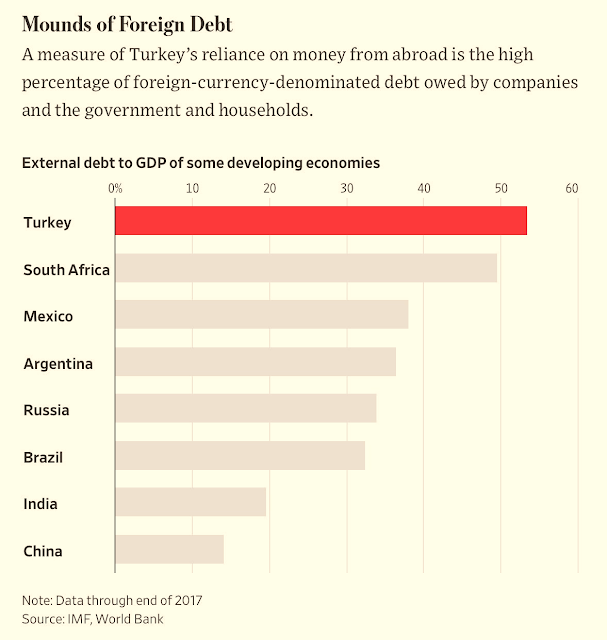 Some of the countries on this list might still be lucky: they receive lots of U.S. dollars because of their oil exports, or because of their trade surplus with the U.S.
China has the largest trade surplus with the U.S. in the world and has therefore always managed to easily pay off their U.S. denominated debt. This trade surplus has always been seen by the U.S. as an unfair advantage for China, especially because it seems like they control their currency and do not want it to increase against the U.S. Dollar (The economics of supply and demand dictate that when demand is high (trade surplus), prices rise, and the currency appreciates in value).

Donald Trump has now tried to reverse this unfair advantage by introducing tariffs on goods from China coming into the U.S.
China has retaliated not only by also introducing tariffs, but by lowering their currency against the U.S. Dollar. Do remember that the Chinese government is the world`s largest holder of U.S. Dollar reserves: USD 3 Trillion worth. Chinese corporations hold another USD 850 Billion. If China wanted to really retaliate against the U.S., they would sell it all and flood the market with these reserves, consequently crashing the U.S. Dollar. However, this would make their own currency more expensive, and thus crash their own exports. In my opinion they have created the best alternative that one can think of: the Belt and Road Initiative (BRI).

The BRI is giving out loans to 68 different countries to fund infrastructure projects. These loans have largely been in U.S. Dollars, aside from their own currency, the Yuan. This initiative has started 4 years ago but has really kicked off last year. Already, there are a few countries who have trouble paying back their debt. I wonder if any collateral has been given out for this debt? Sri Lanka had borrowed USD 1 Billion from China to finance a port. The port has not been a success, and Sri Lanka couldn`t pay back their debt. In exchange, they offered China a 99-year lease for debt relief.
From a macro perspective, China`s Belt and Road initiative is hugely beneficial in three ways: 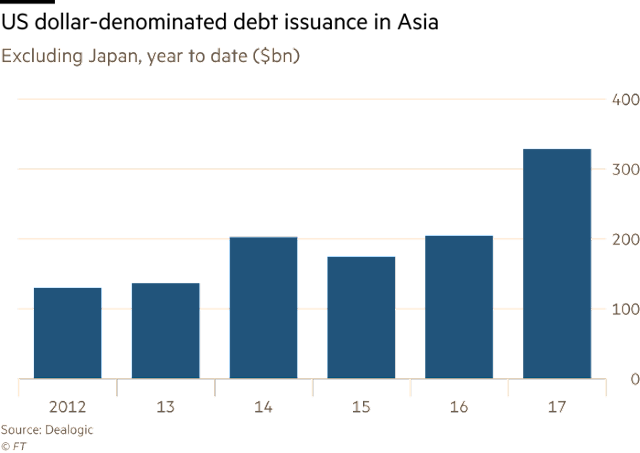 Will Trump eventually win the trade war? He will definitely claim that he has, but I think China will have many more tricks up their sleeves. My prediction is that they will eventually both lose in this trade war, which will be amplified during the next economic downturn.

I`ll leave you with a great chart depicting the size of the USD 63 Trillion in debt that the governments worldwide have accumulated.