August 2018 - Bubbles and Bottoms for Companies -

As I mentioned in the introduction, I think that Tesla has been one of the biggest beneficiaries of the low interest rate policies that have been introduced since early 2009. It has given Elon Musk the opportunity to fund his dreams. Is this a bad way of spending money? That`s the question i`m asking myself all the time. Would you rather have a company that borrows billions and spends it on low quality ride-sharing bicycles (i`m looking at you oBike), or one that spends it on reinventing and optimizing the entire car industry, the space exploration industry and so on? I think it`s very clear that IF equity bubbles and low interest rate policies keep on coming back every decade or so, there should be more people like Elon Musk who put that cheap money to good use, even if his companies would go bankrupt during a reversion to the mean of these interest rate levels. (Or if he would be arrested for trying to hurt short sellers by making false claims).

How messy is the current situation at Tesla right now? There are tons of charts out there, that all tell a great story about all the things that are going wrong with Tesla right now, but I guess the below chart is sufficient for now. If this capital bleeding keeps on going at the current pace, it`s lights out before the end of this year. 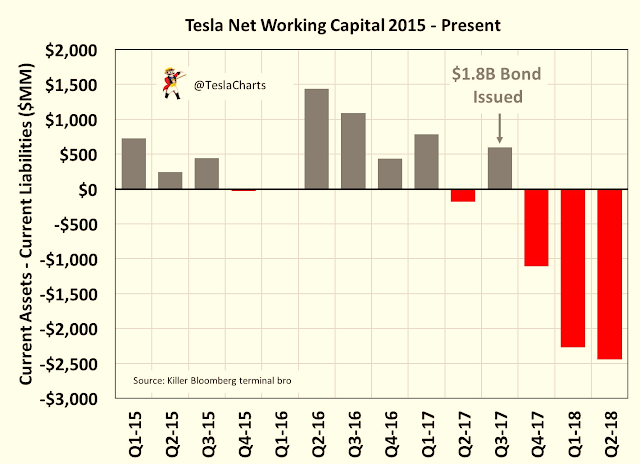 I have shown last month that corporate debt is at an all-time high and makes 2000 and 2008 look like a walk in the park. The reason why companies are still able to pay off this high debt, is because it comes with a low interest rate. Before the last bubble, interest rates were 5.25%. Right now, it`s only 1.91%. It then becomes much easier to pay off larger amounts of money. As I asked before, what will happen if interest rates will rise back to a “normal” level of 5%? 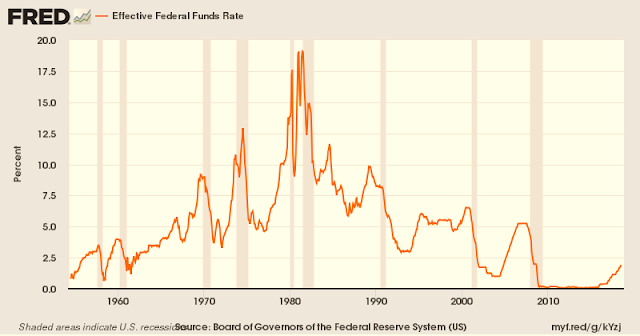 Already, rating agencies like Moody`s have analysed that 60% of businesses in the US have a “speculative” rating, also known as “junk rating”. When you look at the debt itself, 56% of it is rated “medium grade”, which is only 1-4 levels above the junk rating. Since 2009, this medium grade debt has increased by about 10% per year, to USD 4.1 Trillion. 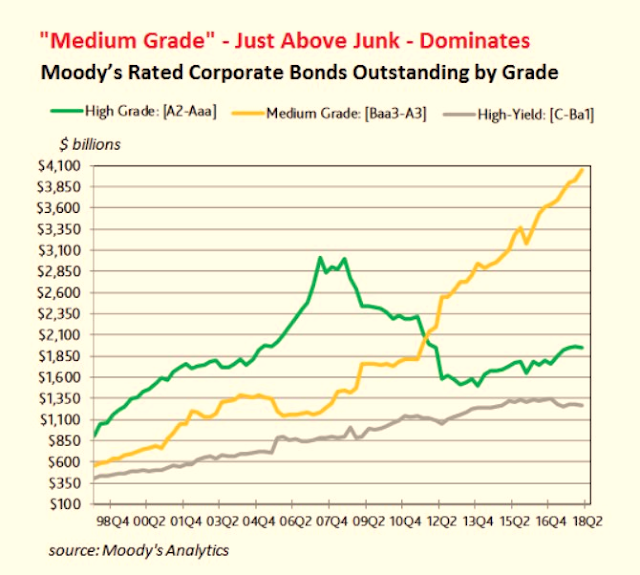 So, all this new debt is being used to make investments and increase R&D, right?
Yes, this would normally be the case. It would then result in higher profits, of which some will be put into higher employee wages, some in investments, and some in dividends. However, as shown in the consumer chapter earlier, employee wages have been stagnant for decades, and cumulative investment growth has been at the lowest level than any other economic expansion since the 2nd world war. 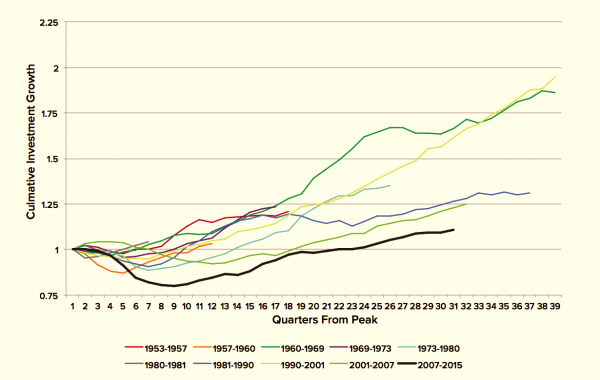 here does all the borrowed money go to? it seems like most of it is going straight to the shareholders. Back in the day, shareholders would get their yearly dividends as a “reward” for holding a company`s shares, but f or the past 3 decades, this has also been accompanied by share repurchases; companies buy back their own shares (with borrowed money), which props up the value of the remaining shares, and thus creates value for the shareholders.
To give you an idea of the size of this “scheme”: During the 60`s, shareholders would receive roughly 1.7% of the US GDP in dividends and share repurchases. Right now, it`s closer to 4.7% of GDP. That is a difference of roughly USD 570 Billion a year. 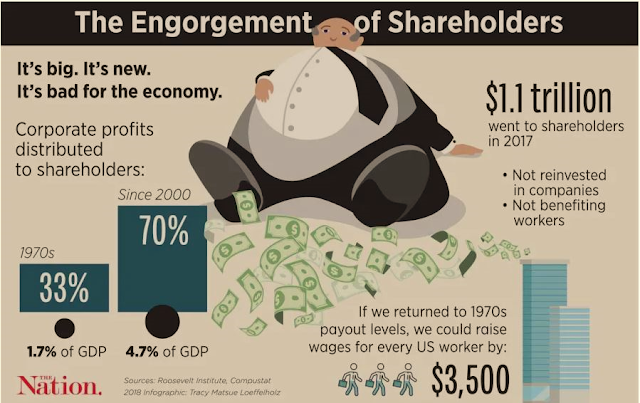 All this debt eventually has to be paid back. As shown last month, in 2018 less than USD 100 Billion of junk debt and leveraged loans are being paid back. In 2 years, that number will already increase to USD 250 Billion, growing all the way to USD 600 Billion by 2022, and staying at that level for the next 3 years.

Many companies will not be able to pay off their loans and will ask for refinancing. This refinancing however, will be done at a much higher interest rate, which can then cause a wave of bankruptcies.

“The real danger with debt is what happens if lots of people decide,
or are forced, to pay it off at the same time”
- Paul Krugman -