October 2018 - Bubbles and Bottoms for Governments -

By now we all know that too much debt has been accumulated over the past 10 years, and that it will be difficult for many governments to pay back their debt when interest rates will start rising. Did you know that not only most corporate debt is short term with floating rates, but that the U.S. government also has an issue when it comes to short term debt that will mature soon?
The following chart shows that an amount equal to roughly 45% of the U.S. GDP has a maturity of 5 years or less. 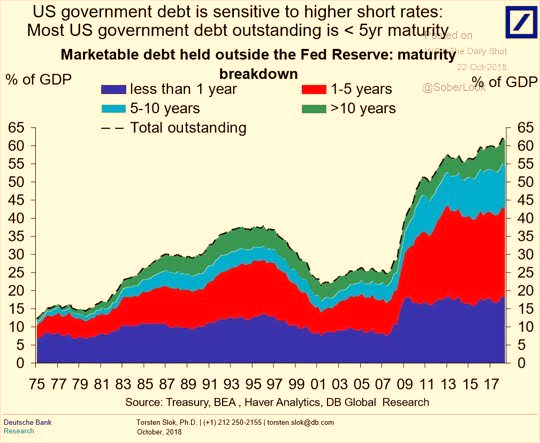 There`s less and less demand from countries like China and Russia for U.S. treasury notes, which has resulted in skyrocketing rates. The U.S. will find it harder and harder to borrow against affordable rates and might eventually have to devalue their currency to be able to pay off their loans. It`s the only reason why the U.S. has survived on credit for so long: any number of dollar bills that are printed will be bought by foreign countries and institutions, since it`s considered as the “save haven”. Inflating their way out of this mess is the least painful way of rebalancing and starting anew (considering that growing their way out of this mess is no longer a viable possibility). The only issue is that history has shown that the “inflation beast” is extremely hard to tame once it gets set free, and inflation rates will always disappoint to the upside.

The biggest winner of the largest debt growth over the past 10 years is China, by a long shot. It has practically double the percentage growth of the number 2 on the list, South Africa. Will China be able to grow its way out of the debt? Will their currency manipulation help them in their quest to increase exports, which in turn helps them to pay off their debts? 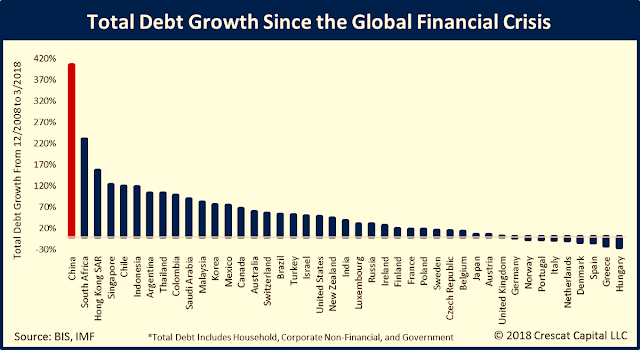 Is Europe better off than China? It depends on which country you ask. If you have a large debt, but a trade surplus like China, or in Europe`s case, Cyprus, you might be able to grow your way out. But if you`re on the opposite, like Portugal, Italy, Spain or even France, then you`re going to have a tough time ahead. Who is the biggest winner when it comes to economic growth? Who has benefited the most from global expansion and the rise of emerging markets? It is no other than Australia, who has just surpassed Holland in having the longest consecutive number of quarterly economic growth in history. They have seen more than 25 years of economic growth, mostly spurred by its abundant amount of natural resources, which have been eagerly purchased by their number 1 customer: China.
25 years of constant economic growth means that an entire generation has not witnessed a single dip in its economy, let alone a recession. Such a mindset creates complacency, which will eventually result in absolute panic. When will this take place? Looking at China`s slowdown in commodity purchases and the decline in the local Australian property markets as of late, I think the first 2 quarter-in-a-row dip is around the corner. 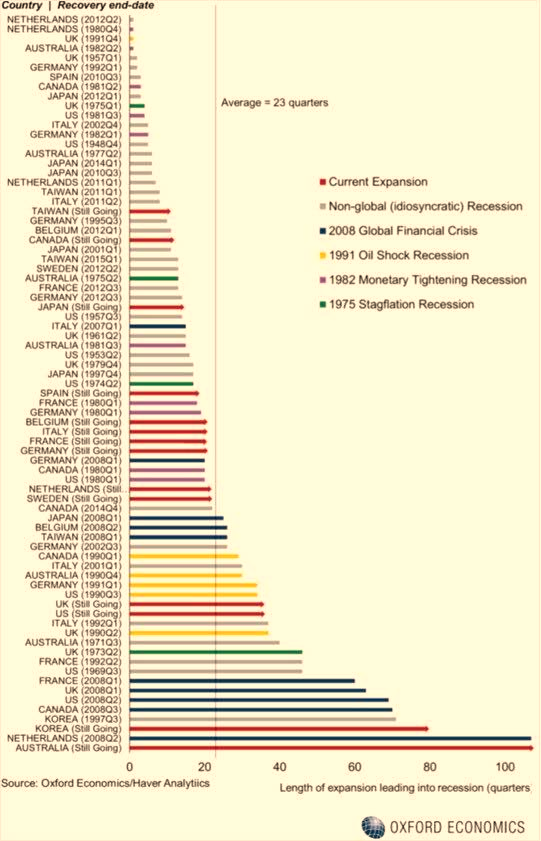