The U.S. markets went down less than 10% in October, and it felt like the world collapsed. Practically every metric went from overbought to oversold in a matter of days. I have compiled lots of interesting charts, scary statistics and worrisome predictions to give you an unbiased view of what happened to the market last month, how it compares to past corrections, and what we can expect for the future.

First of all this was a global sell-off, with global stocks losing nearly 8 Trillion Dollar in the past month, which is the most in one month since 2008. In this chapter you will see lots of referrals to 2008, which could indicate that the worst is not yet behind us. 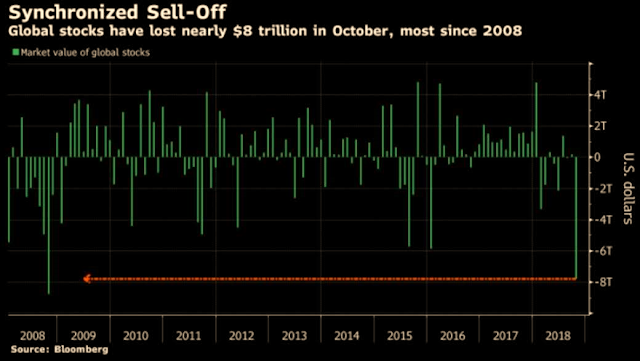 As usual, the “smart money” was the first to be out of the market, and it was mainly the retail investors who got hit the hardest. Since the market decline in January, the smart money flow has crashed to levels last seen in 1995! 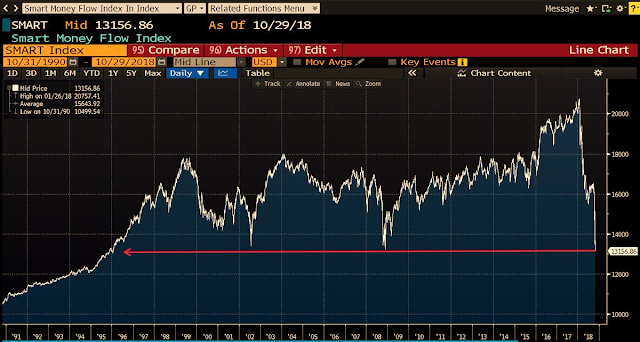 Looking at the 70 largest countries in the world, almost 80% of their markets have now witnessed a “death cross”; this is triggered when the 50 day moving average crosses below the 200 day moving average, which indicates that sentiment is eroding and investors become wary. 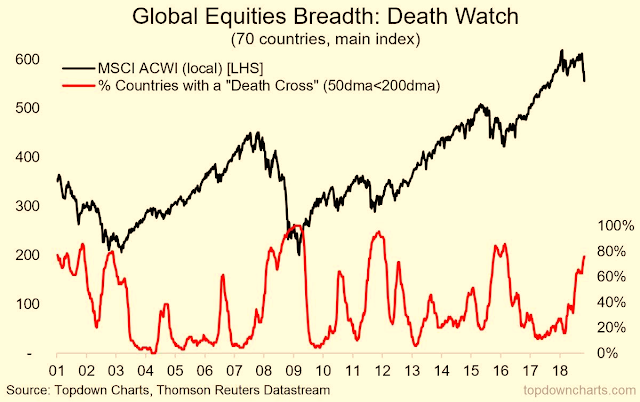 In the U.S., nearly half of the stocks are now down more than 20% from their 52-week highs, which, in most cases, is also their all-time high. 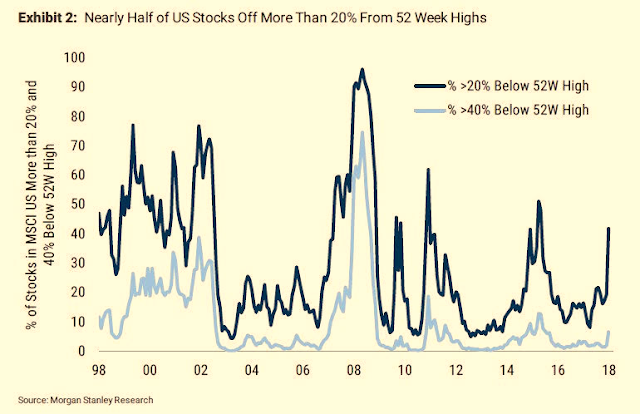 A few companies in the S&P 500 are already down more than 50%! As a contrarian, this is of course a very interesting long-term entry point.

In China the damage is even worse, where not only single companies are down massively, but entire sectors are now down by more than 40%! 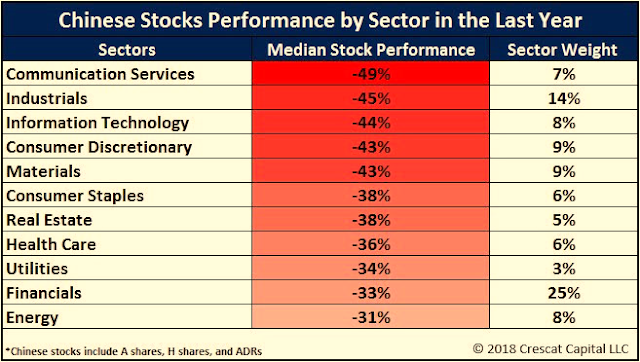 Unfortunately, history shows that even if stocks are down by 50% or 60%, the damage can become even larger. The following newspaper snapshot shows the damage done to tech companies after the dot-com bubble burst. In the case of Amazon, would you have had the guts to ride out its 98.7% decline to 5.51 Dollars, only to have it grow to 2000 Dollars 16 years later? 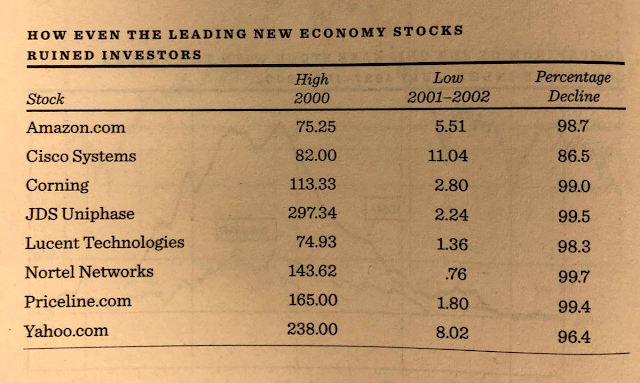 How often do these big declines take place in the market? Since World War 2, 56 pullbacks have taken place (a decline of 5% to 9.9%), 22 corrections (which is considered as a decline between 10% to 19.9%) and 12 bear markets (more than 20% decline).
On average, a pullback takes place once a year, a correction every 2.8 years, and a bear market almost every 5 years.
The good news? Stocks recovered all their losses within 2 months of a pullback, and within 4 months of a correction.

"The four most dangerous words in investing are:
'this time it's different.’” 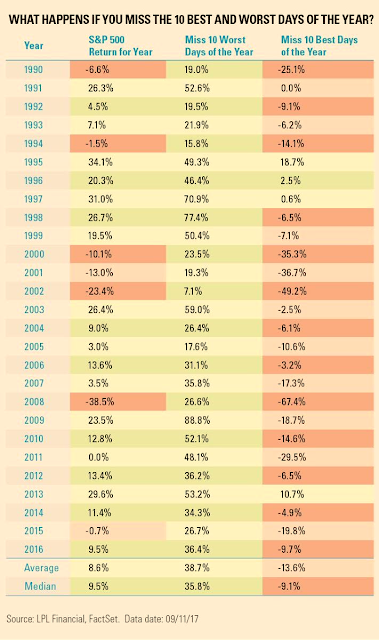 These statistics are great, but it`s of course impossible to use in your normal trading or investing activities. The reality is that you get shaken around throughout the year, whether you`re a bull or a bear. Fact is that this shaking is more volatile during bear markets or corrections than at any other time in the market. The following table shows the largest daily changes that have taken place over the past 70 years, and you can see that both the largest increases, as well as the largest decreases, have mostly taken place when the market was below its 200-day moving average. Volatility is the name of the game during a correction, and trading on this can be much more rewarding than having a static bullish or bearish position. 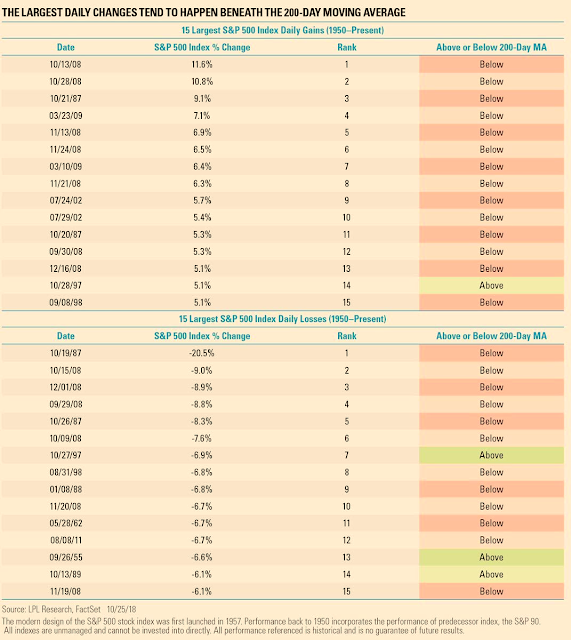 What will the future bring? Looking at the below chart, you can see every drop larger than 10% within 30 days from a multi-year high. Unfortunately for many of us, such a drop has taken place at large inflection points in the past, notably 2008 and 2000. 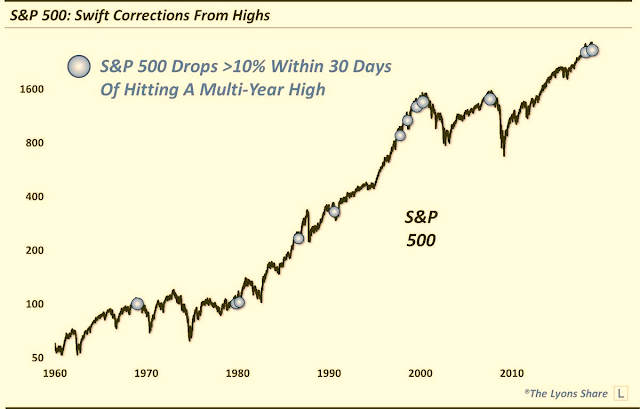 Another worrisome development is the fact that the “last hour compounded return” has crashed since July. Institutional traders and hedge funds normally don`t make large trading decisions until the final hour of the trading day. The first hour of the trading day is considered by many to be the “amateur hour”, where retail money comes pouring in. Who would you rather follow? 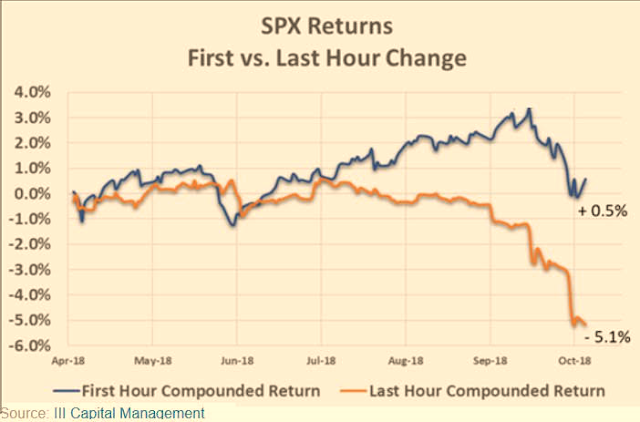 I`ve shown you plenty of reasons why the market is due for at least a correction, but most likely a full-fledged bear market, and I wanted to give you one more clear example of the massive exuberance taking place in the S&P 500. It`s the Median Price to Sales Ratio. This ratio is an indicator of the value placed on each Dollar of a company`s revenue. Currently the ratio sits at an all-time high of 2.63 “Index Dollars” for every “Revenue Dollar”. It is one thing to put a multiple on a company`s profits, but to put a multiple on a company`s revenue is a whole different ballgame. Until 1995 this level has always been at or below a 1:1 ratio, which in my opinion can be considered healthy. However, after 1995 the ratio has skyrocketed, only dipping back to 1:1 for a short while during the financial crisis. Is a multiple higher than 1:1 the new normal, or will we revert to the mean? 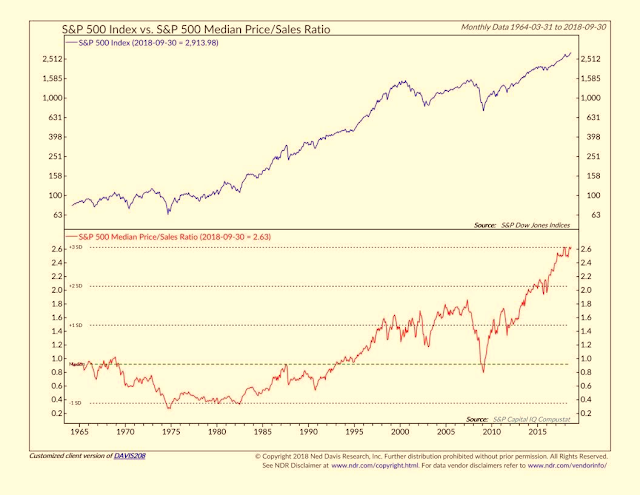 As i`ve stated multiple times in the past months, reversion to the mean is a very strong and inevitable movement. Overshooting the mean takes place just as much as undershooting, and the larger the overshot, the larger the undershot will be. These overshoots can be measured in standard deviations; how much does the current level deviate from the average level, considering a normal price distribution?
The next chart shows the standard deviations from the average level for consumer confidence, inverted unemployment levels, and equity market valuations. Currently that deviation lies at a lofty 1.3 from the mean, above the levels in the 60`s, and nearly reaching the levels from the late 90`s. 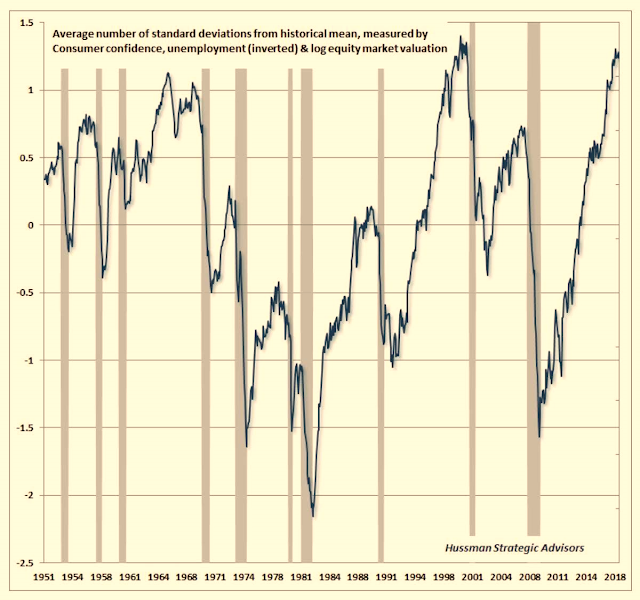 Sit tight the next 1.5 years, because it promises to be highly volatile, with extremely high chances of U.S. markets ending up in bear market territory, clearing all the exuberance that has been created not only in the past 10 years, but since we abolished the gold standard in 1971. There will be a washout unlike anything we have probably ever seen, which will set the stage for the young millennials and generation Z to fully benefit from a new rise, with new rules, new standards, and new players at the top of the largest corporations and the biggest government institutions.