Personal consumption in the U.S. accounts for 68% of the entire GDP. This is the highest percentage of any other western country. The worldwide average is 64%. The fact that this percentage is so high in the U.S. means that aside from growing income, the population has to keep on growing as well.

Republicans are known to limit immigration, which means that the population grows at a slower pace, which in turn means that consumption as a percentage of GDP goes down, dragging down the entire economy. This normally shouldn`t be a problem, if the reproduction rate is high enough to keep the population growing naturally. However, the fertility rate in the U.S. has hit a historic low last year of 1.76 births per woman. To be clear, it takes 2.1 births per woman to keep population growth stable. The difference has to be balanced out by bringing in foreigners, or else automatically personal consumption will decline and drag down the entire economy. 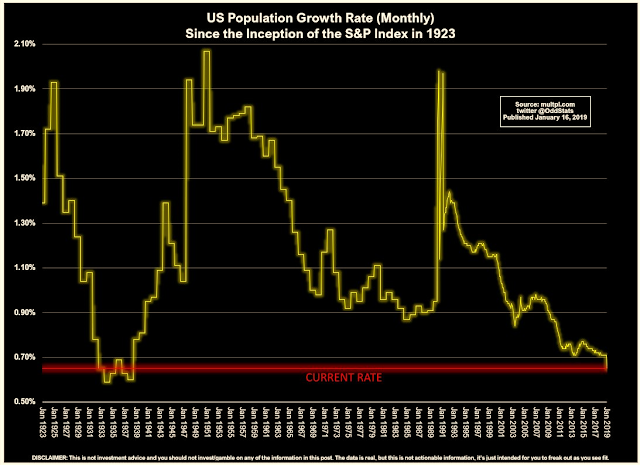 Currently, the population growth rate is at its lowest since the great depression in the 1930`s. This means that less people will be buying cars, houses and other high-ticket items that keep the economy going.

If there`s any macro picture that you should take note of, it`s this decline in the population growth.  This is not only a problem in the U.S., it happens in most western countries, and often at an even worse rate. This decline in the population growth will not only depress personal consumption, but it will also mean that there will be less income tax, which in turn means that the government has to find new ways to service their debt (especially social security and Medicare).

Aside from a growing population, there are a few other factors that could boost an economy. One of them is the growth in productivity; if you can do more work with less people, it doesn`t matter if your population is not growing. However, despite the rise of the internet, robotics, artificial intelligence and other technologies that have promised to boost productivity, there has not been any real productivity growth since 2004. The same year when Facebook launched. Coincidence? Or has this social media platform been a productivity black hole over the past 14 years? 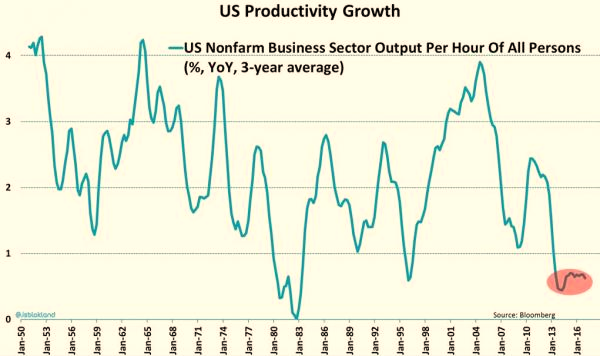 My opinion is that there`s only one way: print, print and print. The US dollar is the world`s currency reserve, and the federal reserve has abused this position by slowly devaluing their currency.
Since 1971—the year when the gold standard was abolished—the US dollar has lost 84% of its purchasing power and shows no signs of slowing down.
Until now, foreign institutions, companies and individuals have been buying up all these newly printed dollar bills, but I see a big shift coming in the not too near future. The U.S.-China trade relations have broken up, resulting in China buying up much less bonds. Russia has stopped buying bonds, Oil nations start accepting Euro`s and Yuan`s for their oil, so less and less demand for these newly printed Dollars will result in oversupply, which will eventually lead to an inflating currency. My base scenario is still a Weimar-esque ending of the Dollar world domination.

“The Dollar is our currency, but it`s your problem”