Markets are having an absolute blast and are now showing one of the best early year performances ever. The first 36 trading days showed an 11.4% increase in the S&P 500 (which is the best performance since 1987), while yesterday the Nasdaq officially moved 20% from its lows and is considered to be back in a bull market. 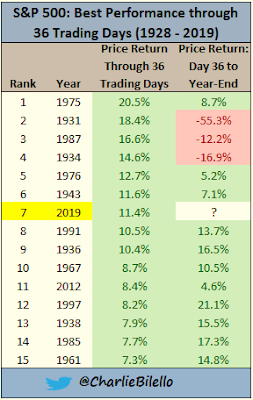 If the S&P 500 would rebound and get out of a bear market, it would officially be one of the shortest bear markets on record. 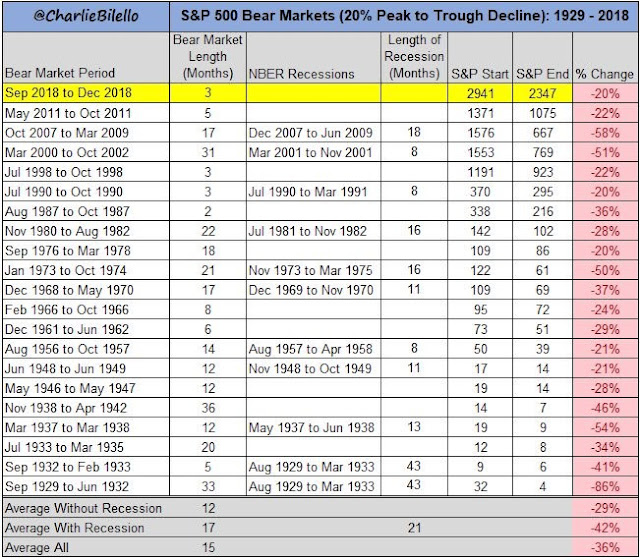 Breaking records all over the place, the S&P 500 is also in the top 10 when it comes to consecutive closes above the 10 day moving average. Are those kinds of statistics silly and kind of untradeable? Yes, but it does show the exuberance that has taken a hold of the markets again since boxing day, and it will most likely end in tears.

The 50 day moving average is another one that is being used to show that markets are breaking records again. This time the chart shows that 98% of the Dow Jones stocks are now above their 50 day moving average. The last time this happened was 3 years ago, and it`s only been at or above that level 14 times since 2009. 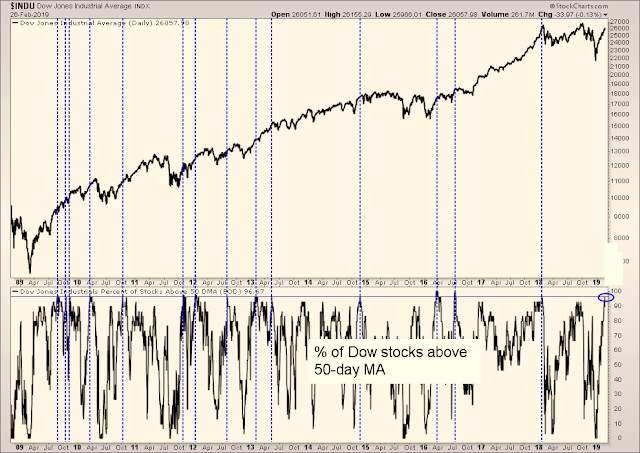 Most of the increase over the past 2 months can be traced back to one simple metric: margin debt. It has increased again in January and seems to always move in tandem with the stock market. It has been off its lows of 669 Billion USD from last May but is still elevated at 568 Billion USD. Just in January, this has gone up by 3%. 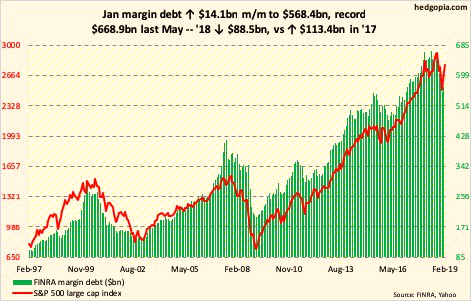 The biggest increases since 26 December go to the stocks that are listed on the Nasdaq. It is now up 10 weeks in a row, and this “winning streak” puts it at the fifth longest streak ever. 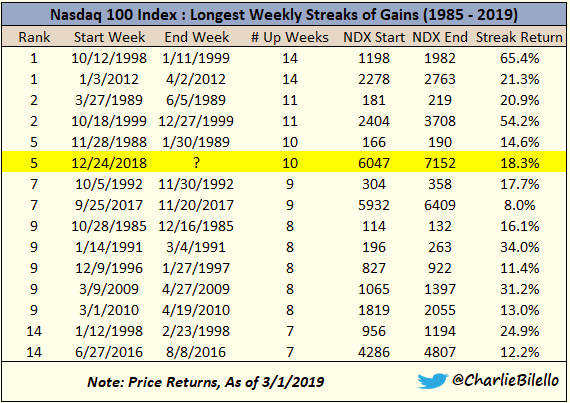 Commercial hedgers were net long over 9 Billion USD worth of Nasdaq index futures late January, the highest since the financial crisis. 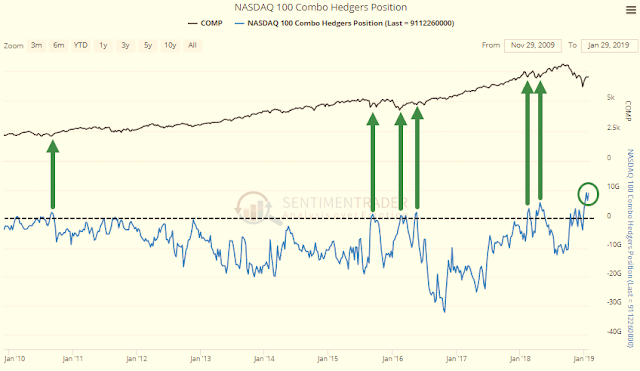 Where will the market go over the next months? My base scenario is still that this is a bear market rally. Good news regarding Brexit or the China tariffs might push up the markets short term, but I don`t think the markets will be able to hold these gains for long.


World trade has gone off a cliff and this can be clearly seen in the Baltic Dry Index, which tracks dry bulk shipping stocks and is seen as a general shipping market bellwether. According to the below chart, there is about a 2-month delay in the S&P 500 price action compared to that of the Baltic Dry Index. As you can see, the index has literally fallen off a cliff since mid-December 2018. 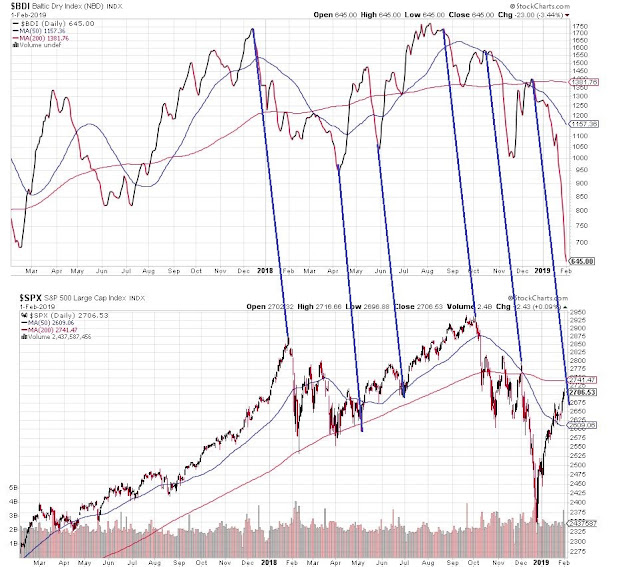 The Baltic Dry Index is only one of many indicators that show a warning sign for the months to come. Another great indicator is the fact that volume has been going down over the past 2 months, while the markets have been going up. When healthy markets go up, volume goes up as well. This makes sense, as more and more people can`t afford to “stand on the sidelines” anymore and join the rally. When the opposite happens, it normally means that people have no confidence in the rally, and it is destined to come back down.

The bottom part of this graph shows the volume. You can see that the red bars (sell volume) increased a lot since the beginning of October. However, the moment when the buying started on 26 December, volumes started going down, and are now lower than at any point in 2018.


Another indicator that shows unprecedented levels, is the share of S&P 500 market cap that is being held short. This indicator is now at a 12-year low and has plunged over the past weeks. Are we seeing pure complacency? 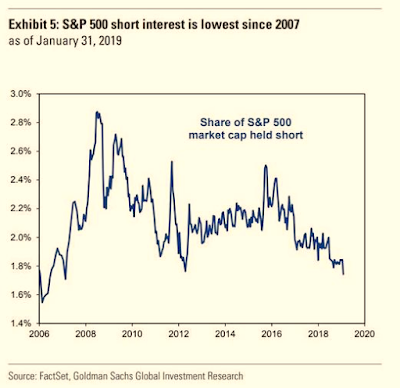 This complacency is accompanied by price to equity ratios, or PE ratios, that are only being surpassed by the 2000 high of about 28. As you can see, the current PE ratio sits between the dot com bubble high, the great depression high, and the great recession high. These are not the recessions you want to be affiliated with! 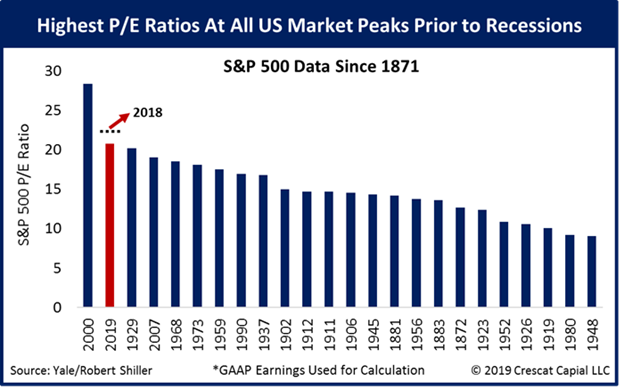 There is a time to diversify and a time to concentrate. If you are just beginning to create wealth, you concentrate. You pick a strong investment and throw your whole energy into it.Don`t dissipate your energies in a dozen different directions.Become an expert, and when you fail, learn from your failures; add this precious knowledge to your storehouse and proceed to correct the mistake in the future. - Robert G Allen - 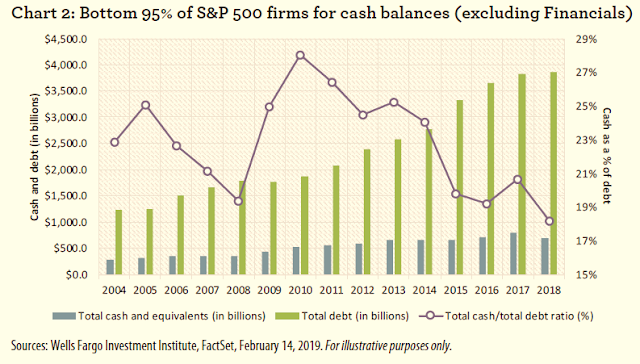 One can see that it`s much safer to be on the long side than to go short in the markets. The chances of being right are just much higher. However, IF a bear market starts, it can wipe out years of gains in a matter of months. As a matter of fact, bear markets move 6.5 times faster than bull markets, so in 2 months it can wipe out a year of gains. This can be seen over and over again, with last December as the most recent example.
It has now been exactly 10 years ago since the bottom in the S&P 500 was hit. 10 years is a long time, but if you look at the chart, you can see that most bull markets lasted longer than 12 years. 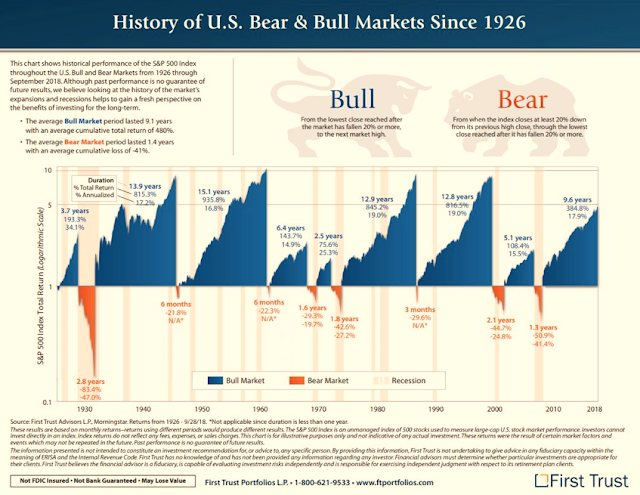 Monetary policy is a blunt tool which certainly affects the distribution of income and wealth, although whether the net effect is to increase or reduce inequality is not clear.