April/May 2019 - Bubbles and bottoms for governments -

Worldwide, economies are slowing down at a pace last seen since 2009. The global purchasing managers index, which is a good indicator of economic health for the manufacturing and services industries, has shown the longest losing streak in at least 20 years, surpassing the declines seen in 2008 and 2009. 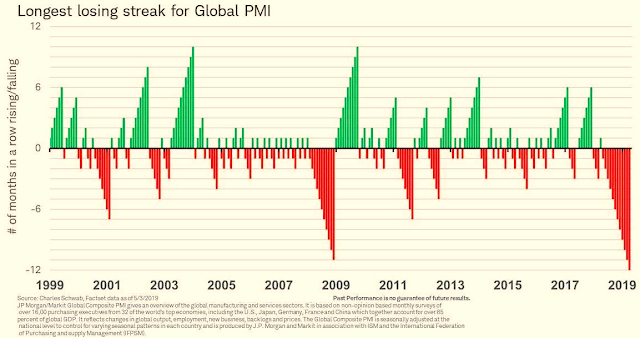 This comes together with a massive and steep decline in global trade, mimicking the declines in 2008. 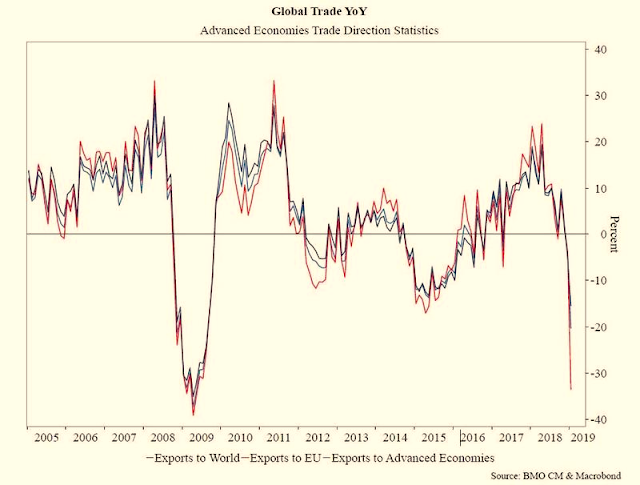 Zooming in on Asia, one can see that export volumes have plunged to levels, you guessed it by now, last seen in 2008. 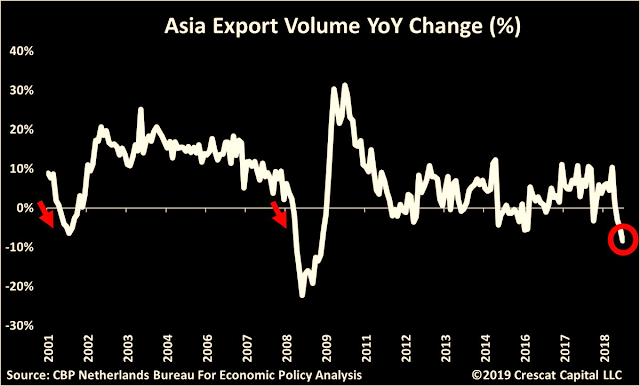 China`s industrial profits have declined last month by 14%, which was the largest decline since 2009. 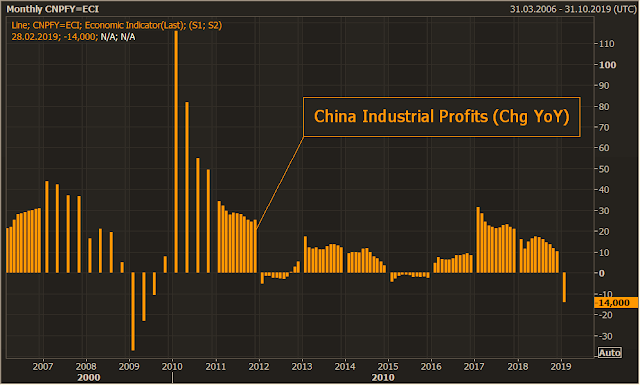 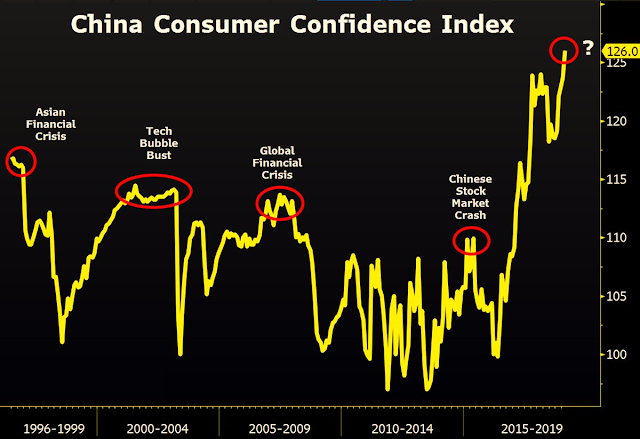 Meanwhile in Europe it`s all looking bleak as well, with Germany`s manufacturing orders going down 8.4%. This has now surpassed the declines from 2012, when we were in the middle of the European banking crisis. 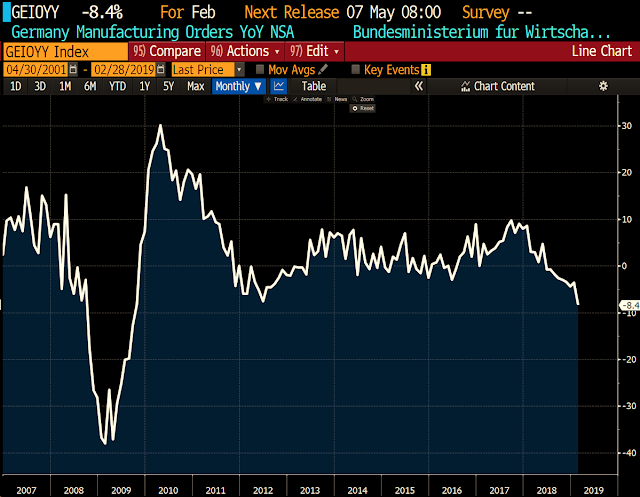 In the U.K. it`s a whole different story, and on the surface you would think that their economy is booming. You can see the massive outlier in U.K. factory output compared to its European peers. But once you start to realize that this is all due to stockpiling because of the Brexit uncertainty, one can imagine that this fast rise will collapse just as fast, whether or not an actual Brexit will take place. 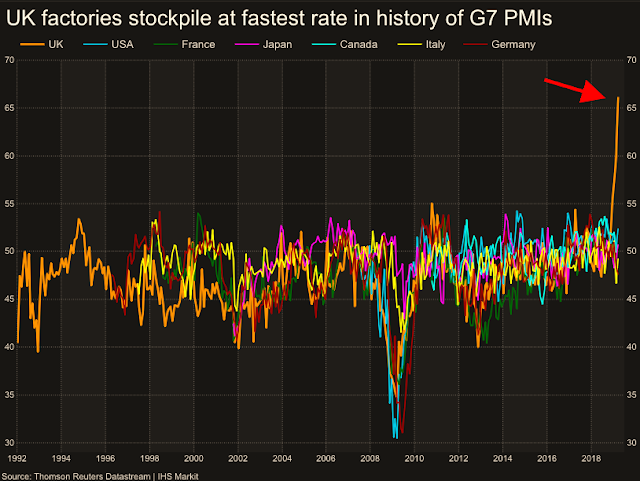 London house prices are going down at the fastest rate in more than a decade, likely due to the fact that much of the London property is being used for speculation by the Arabs and Chinese, who don`t use the property as their primary dwelling. 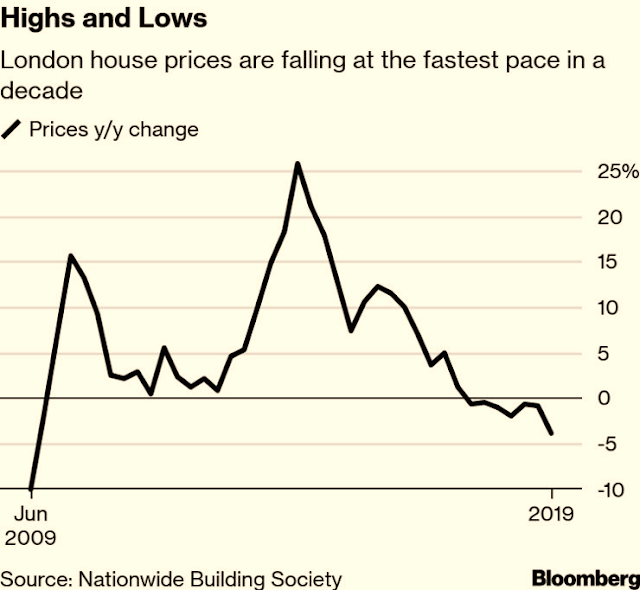 Debt to GDP levels in Europe have increased in all countries since 2008, but you can see that there are actually only two countries who managed to come very close to their pre-recession levels. Germany is practically back at the same level, while the Netherlands is declining rapidly since 2014.

What do these two countries have in common? They are the two largest exporters in the EU zone.
Germany`s exports account for 24.2% of total EU exports, while the tiny Netherlands account for 11.2%. Why have the two largest export nations shown the most positive developments in debt to GDP levels? Reason number 1 is the low Euro. If Germany and the Netherlands would still have their own currencies, it would be at much higher levels in comparison to, for example, the US Dollar. But because the Euro is basically a collection of 19 differently performing economies, the bottom performing economies pull down the value of the Euro and create a massive advantage for the EU`s export nations. The opposite is true as well; if the bottom performing economies in the EU would have their own currency, it would be at lower levels to the US Dollar than the Euro currently is.

This is the main reason why countries like Greece and Portugal are continuously underperforming and need continuous bailouts. In my opinion, countries like Germany and the Netherlands are more than happy to bail these countries out, because on the bottom line there`s still an economic gain.
Now, here`s the real issue with the EU, which is hardly spoken about: despite having a united currency, the EU does not have united EU bonds. Each EU member pays different interest rates on their bonds, and you guessed it; the bottom performing economies pay the highest interest rates.

If there would be European bonds, or Eurobonds, with an interest rate that is based on the average performance of all EU members, just as the Euro is valued, there would be a much better balance in the EU`s economic system, where the best performing economies benefit from a low currency, but have to pay higher interest rates, and the least performing economies benefit from lower interest rates, but have to endure a higher currency. But guess who the biggest opponents are to Eurobonds? You guessed it…

In my opinion, this is the biggest kept secret about the EU, with the Netherlands and Germany being the biggest beneficiary. They literally have their cake and eat it too; an artificially low currency with low interest rates! 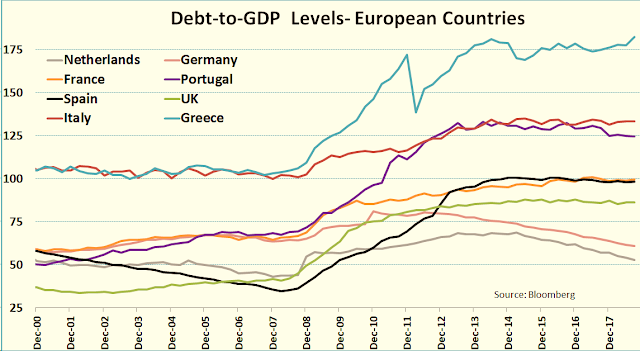 Meanwhile, the U.S. is reaching the record of 120 months of economic expansion, that was set in the mid 90`s. Back then, the economic expansion happened with much higher GDP growth, but nonetheless it`s very impressive, and a great example of what Quantitative Easing can do for a country. The biggest problem right now is that consumers, businesses and even the government itself is becoming addicted and dependent on this constant inflow of “cheap money”, and there doesn`t seem to be a way out of this spiral. 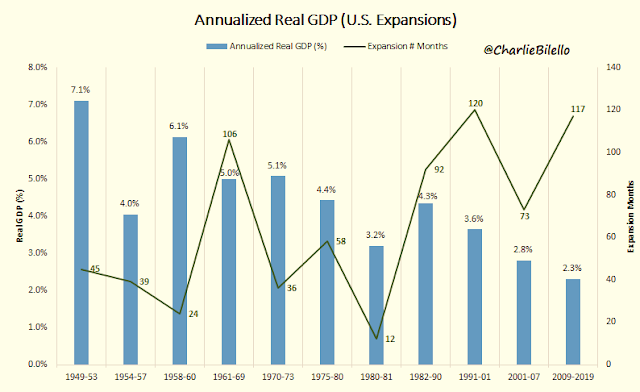