April/May 2019 - Bubbles and bottoms for consumers -

Ray Dalio has come up with a great presentation about why capitalism should be “reinvented”, as it seems to make the rich richer, and the poor poorer. His chart below shows that the income share of the top 1% richest people, in relation to the income share of the bottom 90%, is hovering around its highest point since the great depression in 1929. The bottom of the chart is reached in 1971.

If you`re a bit familiar with my newsletters, you know that this is when the gold standard got abolished, and the world started to get addicted to debt. If you put two and two together, you`d likely come to the conclusion that less debt creation means less wealth disparity, for whichever reason that might be. Perhaps it`s because when you`re rich, it`s easier to get cheap loans, which can make you even more rich.

Now i`d like to play the devil`s advocate here. Despite the fact that there`s a massive wealth disparity, it also seems like the worldwide poverty rate has never been lower than today. So perhaps a big income disparity is not all that bad? Perhaps that top 1% of richest people create a lot of jobs, which in turn stimulates the economy. Perhaps equality is not something we should strive for, as equality always comes with mediocracy. Communism is the greatest example of this. 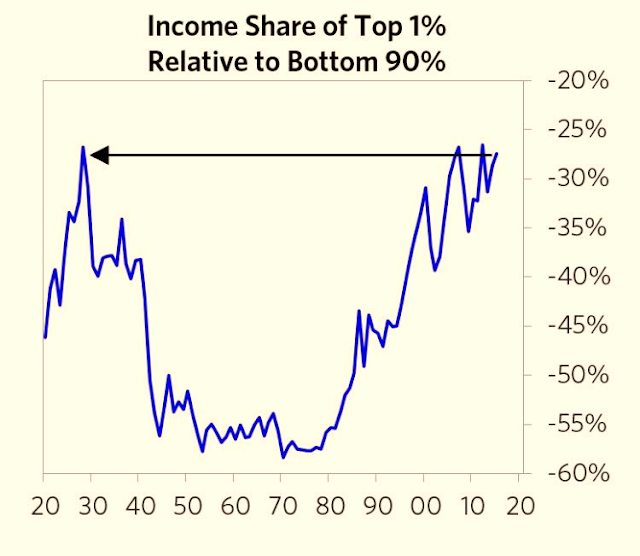 People think there is a shortcut to becoming part of the 1%, and that is real estate. It has been a piggy bank for generations on end, simply because populations and productivity kept on growing. We all know what happened during the great financial crisis; people`s homes had sky high valuations, and they started using their property as an ATM machine. Why wait to cash in on the different between the purchase value and the actual value, if you can already take out some money during your mortgage refinancing? Great idea if the housing prices keep on rising!

Unfortunately, nobody has learned their lesson from the 2008 crisis and property bubble, and we are now at a rate of more than 81% of people who take out cash of their homes during their mortgage refinancing. That is at the same level as late 2007. I don`t think I have to explain to you how this story will end, and I guess I don`t have to tell you that all these “responsible homeowners” will not be part of the 1% anytime soon. 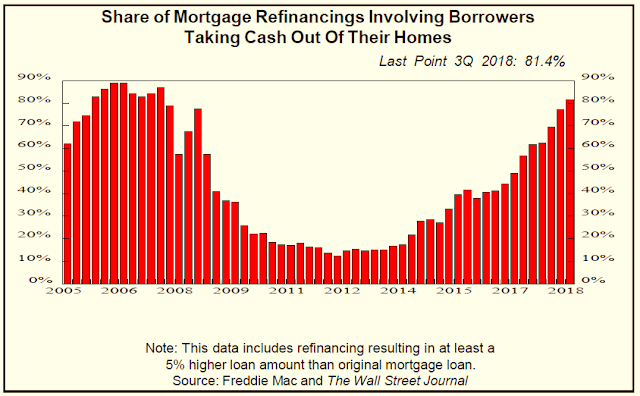 90% of my charts are always about the U.S. markets. This is mostly because it`s the largest market in the world, and a good indicator of how the rest of the world is doing. The second largest economy in the world also has its own problems though, and both consumers as well as businesses and the government itself is to blame.

Below you can see the outstanding credit card balances as a percentage of GDP for various countries at various times in history. As you can see, the mainland Chinese are quite good at raking up debt on their credit cards, even at a larger scale than the U.S.! 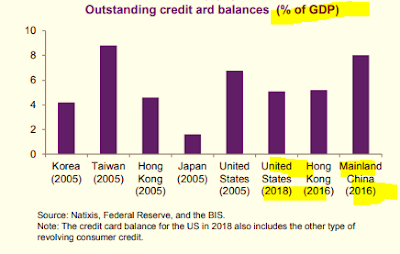