September 2018 - Bubbles and Bottoms for Companies -


The bubble of the month undoubtedly goes to Tilray, having grown tenfold since the IPO two months ago. The grand finale started on 18 September with a stock price of 115 dollars, going all the way up to 300 on Wednesday, and crashing back down to 135 on Thursday.

This stock price of 300 dollars reflected a market cap of 25 Billion Dollars. To put this in perspective, that`s equal to the market cap of HP, or the Formula 1 group!
To think that Tilray reported a net loss of 12.8 Million Dollars on sales of 9.7 Million Dollars in the second quarter of this year, is just mind boggling. A true bubble indeed!
My other favourite bubbles are of course the FAANG stocks (Facebook, Apple, Amazon, Netflix and Google), although some prefer to call it the FAANGM, including Microsoft.

These 6 stocks combined now represent 17% of the entire S&P 500 valuation! The last time such a small group of companies represented such a large chunk of the index, was during the dot-com bubble, when Microsoft, Intel, Lucent, Cisco, Oracle and Dell made up almost 18% of the total S&P 500 valuation. 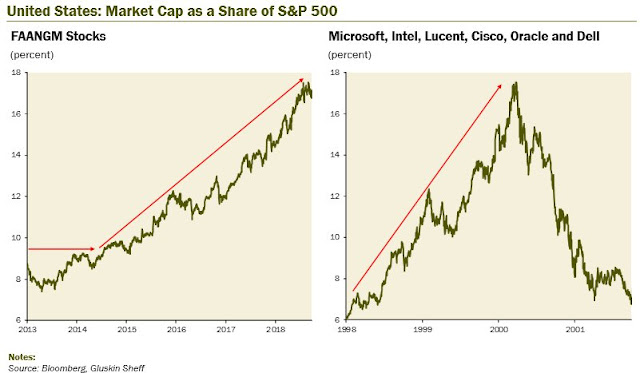 Over the past 30 years, only 5 companies have managed to be worth more than 4% of the entire S&P 500 valuation: Microsoft, General Electric, Cisco, Exxon Mobil and currently Apple. How long did they manage to stay above this “magic” 4% level? 12 months, 15 months, 1 month, 12 months and 15 months respectively. Apple is therefore the “winner” in this contest, but the question is: for how long? The other 4 companies incurred massive declines after reaching this 4% threshold, and the only thing I can ask myself is, “is this time different?” 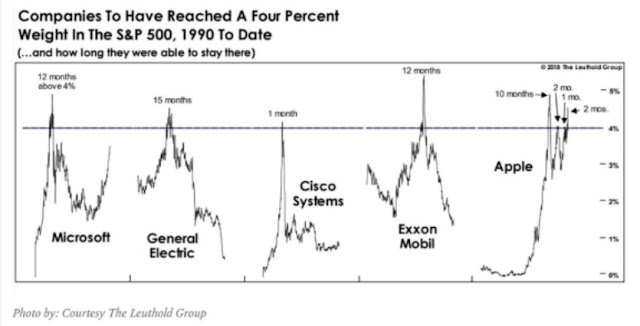 A company like Apple will definitely withstand the coming downturn, be it with a 50% or 60% lower valuation, but they`ll survive. My worries are more targeted towards companies who have a smaller financial “war chest” and are drowning in debt.

During the ZIRP (Zero Interest Rate Policy) period, many companies loaded up on cheap 5-10 year loans. These loans are now set to expire, and a wall of outstanding debt will mature over the coming 5 years. Normally a company would just roll over these debts for another 5-10 years, but with interest rates spiking the way they`ve done over the past year, it becomes highly likely that companies just won`t be able to afford this. The result will be mass bankruptcies, which could cause a chain reaction on stock markets, consumer spending and eventually economic growth. 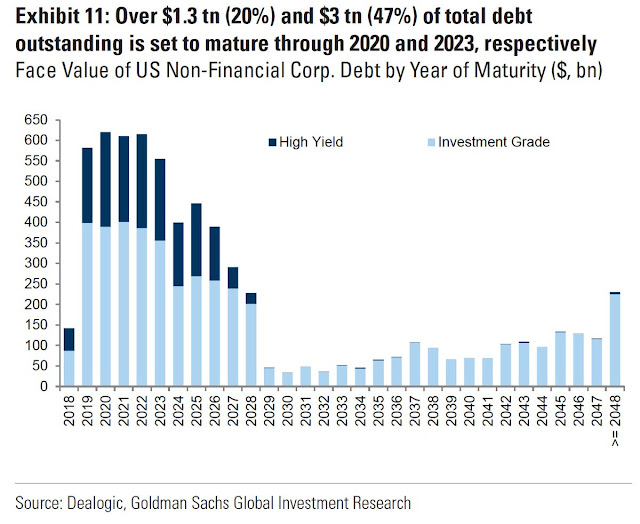 To not make this newsletter sound too negative (again), I will leave this chapter with a great potential bottom: General Electric. As shown earlier, in the late 90`s it was the darling of the stock market, having over 4% weighing in the total S&P 500 valuation, but things quickly turned south, and the stock never recovered the valuations from its peak in September 2000. In September 2007 it reached a lower peak, and mid 2016 another lower peak was set. To top off all the negativity surrounding the company, it got removed from the Dow Jones Index in June this year.
Currently the stock sits at a valuation of just over 100 Billion Dollars, with revenue of 122 Billion Dollars last year. Lots of potential if you`d ask me!